A 19 minute short film which was completed at the end of 2008. It tells the story of a Eva, a magical marionette who is brought to life for the amusement of a corrupt and violent prince. This is the story of her struggle for freedom.

The film was written and produced by Amanda Gunawan and directed by Lauri Priha. Cinematography and sound design by David Mace-Kaff of Evolve Film Productions and production design by Leon DeFrenne.

Shot over 3 Weeks on Kodak 7219 500T 16mm film at St Johns Cathedral in Brisbane, Australia. The dining room and kitchen scenes were shot in Bli Bli Castle on the sunshine coast. 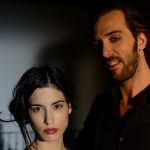