Set in the closed and poisonous world of an isolated private school for boys, Dartworth takes us deep into the power structures in the school, where the boys operate a counter world entirely of their own making and within the Prefects control. When Julian Mitchell, self-proclaimed anarchist, is forced into this world his ideas and actions begin to unravel the framework of which this proud and stoic institution is built on. The students are unwillingly forced to bond together to bring about the downfall of their arch rival Mr Darren ‘The Spider’ Twine. When their prank goes horribly wrong the battle between the Prefects and Mitchell becomes a race to survive as the police begin to uncover the truth.

Dartworth well deserved drinks after the shoot (2)
the caption 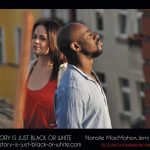 “No Story is just Black or White”Feature Film